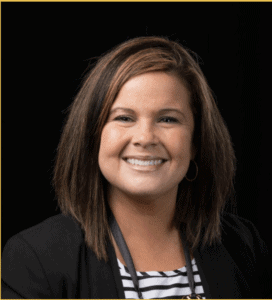 Dr. Betsy Rosenbalm, a National Board Certified Teacher, began her career as an elementary classroom teacher in 2001. She taught 2nd, 4th and 5th grade before becoming an elementary reading specialist and school level instructional coach. She continued her career as an assistant principal in an elementary school, and then became the principal of Conover School for four years. After that, she served as the Director of Exceptional Children and Communication Services, with additional responsibilities as a Testing Director, 504 Coordinator, and ESL Coordinator for a total of 4 years before becoming a NC New Teacher Support Program (NT NTSP) Coach and Adjunct Professor in the Department of Reading Education and Special Education at Appalachian State University in 2017. In 2019, Dr. Rosenbalm became the Director of the Public School Partnership and Regional Director of the NC NTSP in the App State Region. She was a NC Teaching Fellow in her undergraduate program at Appalachian, a top four finalist for Iredell-Statesville Schools’ Teacher of the Year in 2006, and the Newton-Conover and NC Region 7 Principal of the Year in 2012-2013. Her undergraduate and graduate degrees were obtained from Appalachian State University in 2001, 2005, and 2008, and her Educational Doctorate in Curriculum and Instruction was obtained from Gardner-Webb University in 2012. Betsy’s three young daughters are her pride and joy!